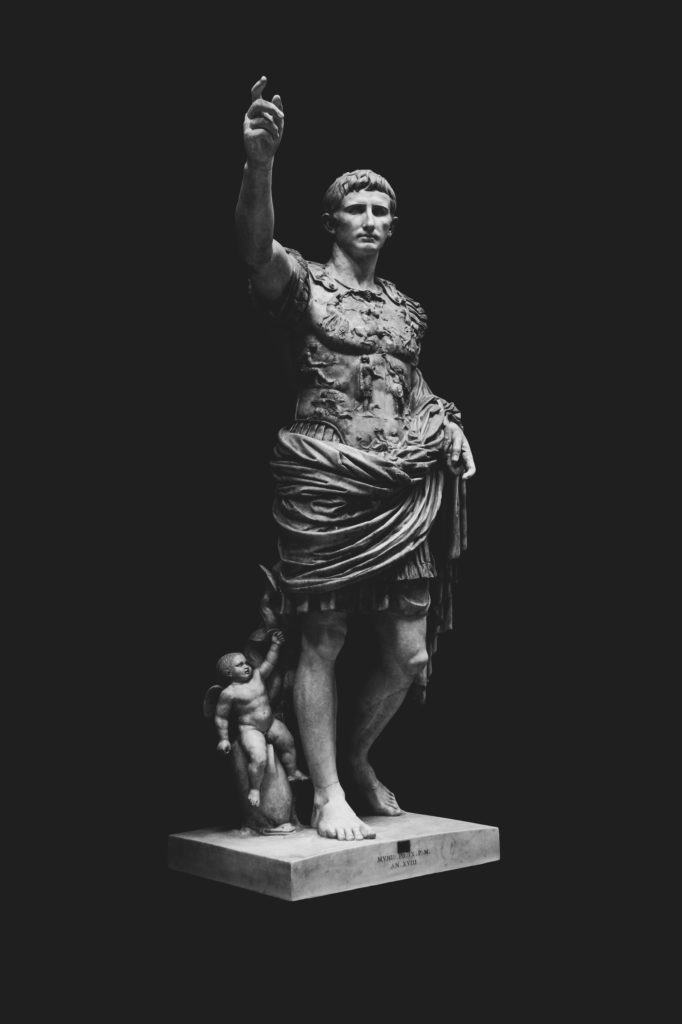 This photograph is based on a statue found in 1863, at the house of Livia (Augustus’ wife) at Prima Porta, about 7.5 miles north of Rome along the Via Flaminia. It was her country residence. The statue is located in the Vatican Museum. There is debate concerning its date, 20 BC, or perhaps, later, early in Tiberius’ reign. The form of Augustus is presented in Hellenistic idealized style rather than in the realistic style of Roman portraiture. Nevertheless, Augustus is clearly recognizable. The posture of the figure is reminiscent of classical Greek sculpture. The figure places most of its weight upon the right leg, while the left is bent and relaxed. This gives the statue a feeling of dramatic tension. The pose is the rhetorical adlocutio (speech), raising the right hand, presumably addressing his troops. His left hand holds a consular baton. The bare feet are an allusion to divinity; it’s the way gods and goddesses were depicted in classical sculpture. The narrative on the cuirass is allegorical as well as historical. In the center, it depicts the return of the Roman standards by the Parthians, lost by Crassus at Carrhae. Receiving the standards is a Roman military figure, presumably Tiberius. Surrounding this significant event are the allegorical figures scholars think represent nations subdued by the Romans: the Celts to the right, to the left is a figure representing nations not completely subdued, Hispania and Germania. Above, is the chariot of the sun, being driven by Sol, illuminating the entire scene. The chariot is preceded by Aurora, goddess of the dawn, who always precedes the sun and the day. Above Aurora is Venus (the morning star), the goddess from whom the Julian family claimed descent. Caelus, the god of the sky, presides over all. Below the scene, on the same longitude as Caelus, reclines the goddess Tellus or Terra Mater. She is the goddess of the earth. We can tell by the cornucopia (horn of plenty) resting on her thighs and the infant at her side. To her left is Apollo, riding a griffin. Apollo is the god who ensured Augustus’ victory at Actium. To the right of Tellus is the goddess Diana, Apollo’s sister, riding a hind. On the shoulder flaps, at the top of the cuirass, are images of a sphinx. This may be a reference to Egypt and its incorporation into the empire by Augustus. The putto riding a dolphin next to the statue’s right leg is cupid, son of Venus. The dolphin represents the naval victory over Antony and Cleopatra, at Actium. Cupid is another reference to Venus and to the divine origin of the Julian line.

About The Artist, Craig Phares

Craig took this picture for Pro Romanis in the Vatican museum several years ago on a photographic expedition to Rome. Craig Phares is a photographer, artist, designer, and programmer. He built his first game on a TI-85 calculator when he should have been doing math homework, and has never stopped, creating numerous jaw-dropping digital masterpieces for the web, desktop, and mobile devices. Craig studied sculpture at the Mason Gross School of the Arts at Rutgers University, while constantly improving his design and programming skills on his own time. He went on to work for several advertising agencies, finally leaving to form his own company. Craig is the founder of Six Overground, a progressive digital agency focused on building full-scale digital platforms. His company has produced award-winning work for major brands and corporations including Citigroup, Estée Lauder, Havaianas HBO, Johnson & Johnson, Mars, NFL, U.S. Air Force, and USDA. When he’s not glued to a computer monitor, you’ll find him in the real world, dreaming up the next big thing. To learn more about Craig, visit his website at http://sixoverground.com/about/