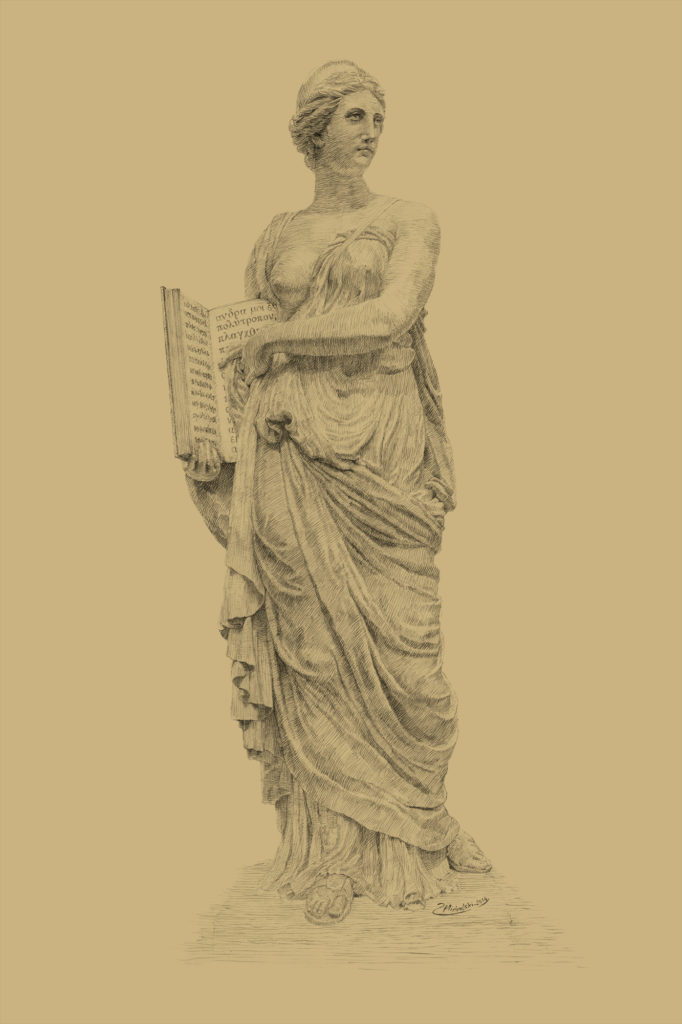 This pen and ink drawing of Calliope is based a statue by Augustin Pajou (1730-1809). He was a winner of the Prix de Rome, a prestigious competition that funds the winner for study in Rome. The statue of Calliope was executed in 1763. It can be found in the National Gallery of Art, Washington, DC.

In Greek mythology, Calliope (Καλλιόπη, Kalliopē meaning “beautiful-voiced”) is the first among the muses, presiding over eloquence and epic poetry. Ovid called her “Chief of all Muses.” She was associated with Apollo. She is the mother of Orpheus, master of the lyre. At the request of Zeus, she adjudicates a dispute between Aphrodite and Persephone over Adonis. Ovid has her defeating the daughters of Pierus, the king of Thessaly, in a singing contest. She then punishes them for their presumption by turning them into magpies.

Calliope is invoked by Virgil in the Aeneid:

Calliope, begin! Ye sacred Nine,
Inspire your poet in his high design,
To sing what slaughter manly Turnus made,
What souls he sent below the Stygian shade,
What fame the soldiers with their captain share,
And the vast circuit of the fatal war;
For you in singing martial facts excel;
You best remember, and alone can tell.
Aeneid, 9.525 (translated by Dryden)