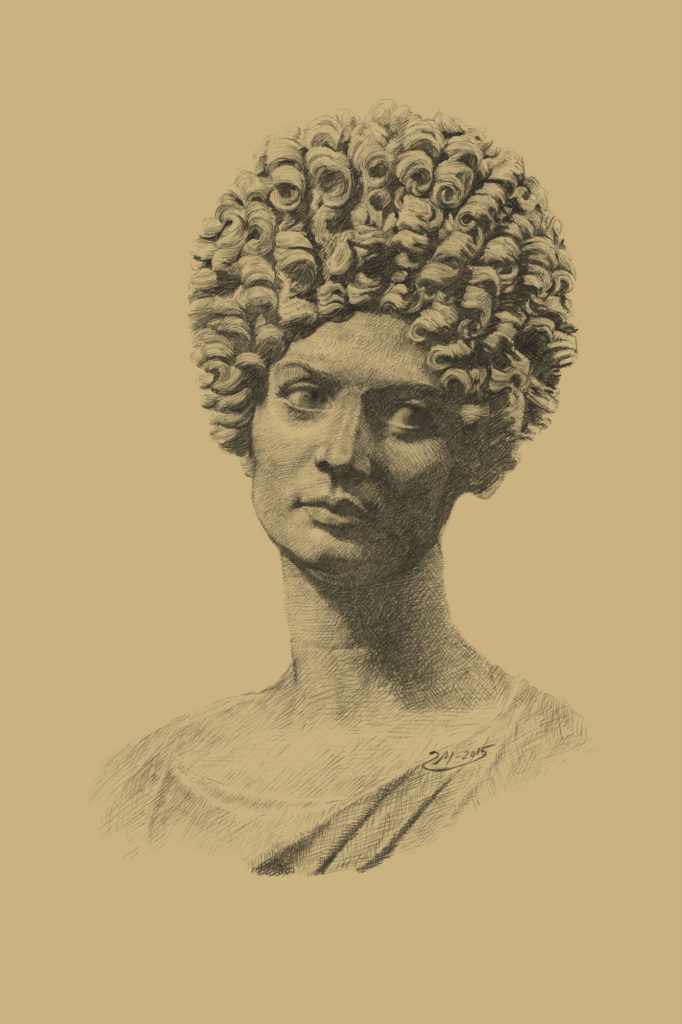 This pen and ink drawing is based on a marble portrait bust of a young Flavian woman, possibly Vibia Matidia (85-165 AD), in the Capitoline Museum in Rome, Italy. The subject is young and beautiful with a remarkable hair style. It’s unclear if this was her real hair, a wig or a hair extension. The style is extremely elaborate. It must have taken hours to accomplish. Romans considered hair an erotic part of the human body and an important part of how a woman presented herself. How one dressed one’s hair was an indication of a person’s status and role in society. Clearly, this woman was upper class. The work would have been done by slaves called ornatices.

Vibia Matidia, or Matidia Minor, was the daughter of Salonia Matidia from her second marriage. Her mother was the emperor Trajan’s niece. Her half-sister, Vibia Sabina, became empress and wife of Hadrian. Hadrian was also her third cousin. After her father’s death in 85, Matidia was raised in the imperial household. Matidia never married, nor did she have any children. Yet she was a very wealthy, cultured, and influential woman. When her sister became empress, she would often travel with her and her brother-in-law. Matidia underwrote the restoration of the theatre of Sessa Aurunca which was probably damaged by an earthquake during the reign of Antoninus Pius (138-161). Her generosity was commemorated with a statue there. Matidia lived to an advanced age and outlived most of her relatives. In her later years, she was very close to her great-nephew, the future Princeps Marcus Aurelius and his family. Marcus Aurelius would sometimes allow his daughters to stay with his great-aunt. Trajan gave her a villa.