Founder of the Roman Republic

Usually ships within 4-to-5 days.

Ships from and sold by Pro Romanis Arts.

Founder of the Roman Republic

This charcoal drawing of Lucius Junius Brutus is based on a bronze statue that can be seen in the Capitoline Museum, Rome. It may be Etruscan in origin. The head is dated to anywhere from the 4th to 1st century BC. The toga-clad body is a Renaissance addition. The head was discovered in the 16th century. It was kept in the Capitoline Museum until Napoleon confiscated it, carrying it during his triumphal procession in Paris in 1798. If was returned to Rome in 1816, after Napoleon’s defeat at Waterloo and his incarceration on the Island of St Helena.

But is it truly a bust of Lucius Junius Brutus? A profile of the bust is similar to the profile on a coin minted by Marcus Junius Brutus, his descendant and one of Caesar’s assassins. 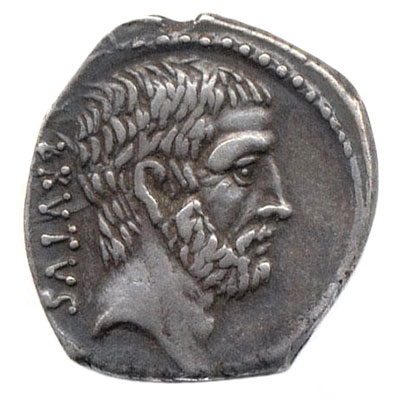 Obverse: coin minted by Marcus Brutus shortly after the assassination of Julius Caesar. Lucius Junius Brutus was one of the founders of the Roman Republic and witnessed the death of two of his sons after they attempted to restore the monarchy.

This was a popular thing to do during the late 1st century BC; creating detailed portraits of early Roman personalities.

Zygmunt (Zyggi) Michalski began drawing from a very young age. He studied Architecture at the Cracow University of Technology. There, he studied painting and drawing with Krystyna Wróblewska—a member of the Polish Academy of Sciences—a well-regarded painter, graphic artist, and book designer. Her work and career have appeared in academic books such as Archiwum Sztuki Polskiej XX Wieku and Tom 2 Twórczość Krystyny Wróblewskiej. She herself studied under the famous painter Ludomir Slendzinski. Michalski also studied under Professor Wiktor Zin at the Architecture Department. Dr. Zin was a widely published author and a designer of many churches internationally and in Poland. He was a well-known TV personality. Michalski worked with Zin at the Polish Studios for the Conservation of Cultural Property. Michalski is equally adept at pen and ink drawing and oil painting. He can paint in various styles and is particularly interested in the historical and surrealistic subject matter. He is also very strong in portraiture. Zygmunt Michalski has executed more than 25 pieces of art for Pro Romanis. You can see some of Zyggi’s other work at en.zmichalski.art.pl.