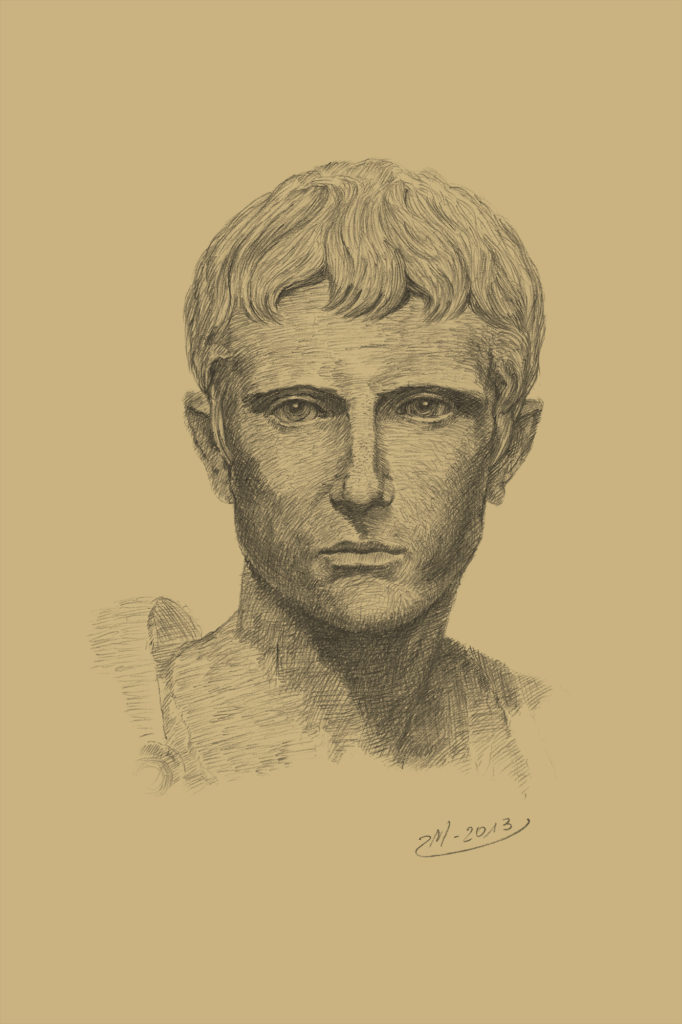 Gaius Octavius Thurinus was the birth name of Octavian, who later became the first Princeps of Rome. After his maternal great uncle, Gaius Julius Caesar, adopted him, he became known as Gaius Julius Caesar, his adoptive father’s name. Contemporaries added the name Octavianus either to distinguish him from his famous uncle or to diminish him by pointing out his relatively humble origins (he came from an established Equites family). As time passed and Octavian consolidated his political position, he acquired other titles and names, the three most important ones being Princeps Civitatis (First in the City), Princeps Senatus (First Among Senators on the Censor roll) and Augustus (majestic, stately, venerable, sacred, grand).

He was born in Rome in 63 BC. His family was prominent in the town of Vellitri. His father died when he was young and his stepfather was not involved in his life. He was mostly brought up by his grandmother, Julia, Julius Caesar’s sister. Julia died in 52 BC. Octavius delivered her funeral oration. He donned the toga verilis four years later and was elected to the College of Pontiffs at the age of 16, in 47 BC. After this point in time, his parents got involved in his life. When Octavian was 17, he traveled to Spain to join his great-uncle. Shortly thereafter, Caesar named Octavian the beneficiary to two-thirds of his estate. Then Caesar paid for Octavian and his friend Agrippa to be educated at Mediolanum and later undergo military training at Apollonia. Caesar was assassinated in 44 BC. After landing at Brundisium, Octavian was made aware of the contents of Caesar’s will, which convinced him to make a play for leadership of the Caesarian faction. This put him into direct conflict with Antony. After aligning himself with the Senate and the opponents of Antony, Octavian did an about face and condemned Caesar’s assassins as enemies of the state. He then formed the second Triumvirate with Antony and Lepidus.
They then launched a reign of terror (proscriptions), in which many leading Roman Senators and Equites were murdered, and their property confiscated. Thus well funded, the Triumvirs met the tyrannicides at Philippi, where Brutus and Cassius perished. The Triumvirs then divided the Roman state between the three of them; Lepidus to North Africa, Octavian to Rome and the West, Antony to the East. After vanquishing Pompey Sextus, the uneasy truce between Antony and Octavian finally evaporated. Antony and Cleopatra were defeated at Actium in 31 BC, and both died the following year. Octavian was now sole ruler of the state. In 27 BC, he made the First Constitutional settlement with the Senate. In 23 BC, there was a Second Constitutional settlement. This agreement, established political stability and rationalized the government. Octavian, now called Augustus, ruled the state in conjunction with Agrippa, his righthand man. Maecenas, another of his amici, served the regime in artistic and cultural matters. Augustus, called princeps, held power until his death in 14 AD.