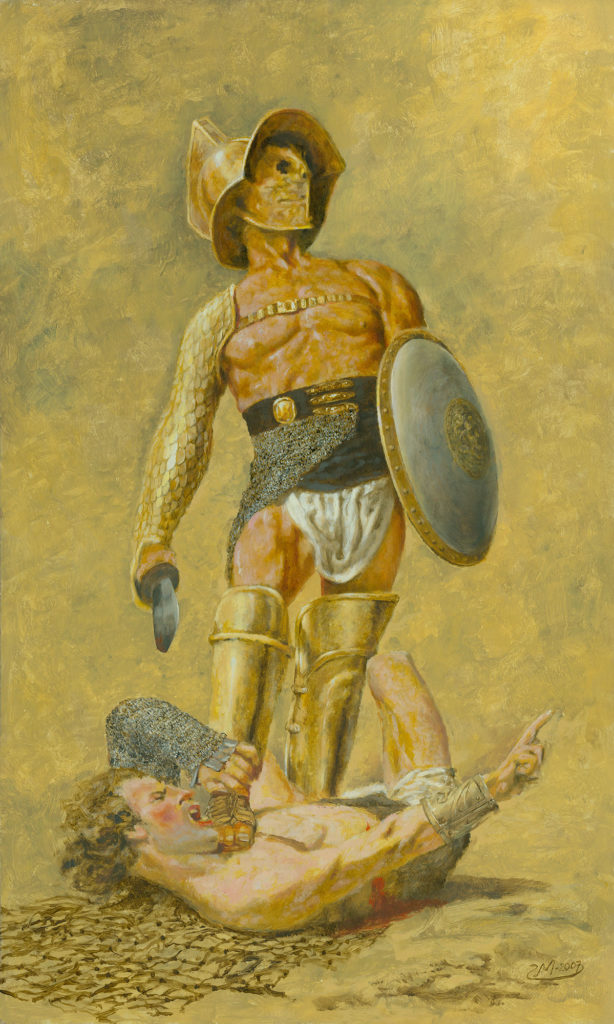 “Habet!” literally translates into “He, she, it has” in Latin. The “him”, meaning the opponent, is implied. In the alternative, the expression “Habet!” could refer to the downed opponent, translated as “He has it” or “He’s got it”, meaning he has received a significant blow. Either way, this presumably was a shout by the crowd in the arena when a gladiator had struck a winning blow against his opponent. The title for this painting comes from the novel Quo Vadis by Henryk Sienkiewicz. The word, however, can be found in various encyclopedias dealing with the subject of gladiatorial combat. In fact, it was the victorious gladiator who had struck a telling blow who called out “Hoc Habet!” “He’s got it” and the Editor (official presiding over the games) would answer “Habet.” The injured gladiator would then go, if able, to the edge of the arena and lift his finger in supplication to the audience.

This oil painting shows a gladiator, a Thrax, standing in victory over his opponent, a Retiarius. The vanquished foe lifts his finger to the audience in supplication, begging for mercy. This particular contest would have taken place sometime during the Imperial period, when the Retiarius became a prominent class of gladiator. The painting was inspired by a sculpture made by Gerome.

Gladiators were categorized into types; among them were the Thrax or Thraex (Thracian) and the Retiarius. Each gladiatorial type had a different way of fighting. The Thrax was fairly well armored with both legs protected by mid-thigh grieves. He wore a wide belt made of leather to protect his abdomen. Attached to that was a chain mail cloth that protected his right hip and thigh. His sword arm was protected by scaled armor from wrist to shoulder. He held a gladius (a short Iberian thrusting sword) in his right hand. Or, he might fight with a Thracian curved sword, On his left, he carried a small shield, called a buckler. His helmet protected his head and face but significantly impaired his vision. The Thrax was usually big and muscular but slow moving. The Retiarius, on the other hand, relied on his speed and coordination. Armed only with a trident and a net, along with a stabbing dagger, the Retiarius had one of his arms protected by chain mail or a thick cloth wrapped in leather. He also had a shoulder guard. Otherwise, he had no protection for any other part of his body. Usually the Retiarius was paired with a Murmillo, literally, fish man, a Secutor (follower or pursuer) or a Thrax (Thracian).

Michalski worked with Zin at the Polish Studios for the Conservation of Cultural Property. Michalski is equally adept at pen and ink drawing and oil painting. He can paint in various styles and is particularly interested in historical and surrealistic subject matter. He is also very strong in portraiture. Zygmunt Michalski has  executed more than 25 pieces of art for Pro Romanis. You can see some of Zyggi’s other work at http://en.zmichalski.art.pl/.